This celebration was born in 1371 to celebrate the patron saint of Narni: S.Giovenale.

Modern celebrations that are part of Narni’s past in the form of ancient rites and games.  And still,every year, through the streets of the city, from the first of May, passe the crier who announce the start of the celebrations for sporting and religious celebrations.

On the night of 2 May  a solemn procession passed throught the streets of Narni until it reaches the cathedral where the lords of the area, together with the various corporation , make their offer to the patron saint.

As in the Middle Ages, the city of Narni is divided into three districts: 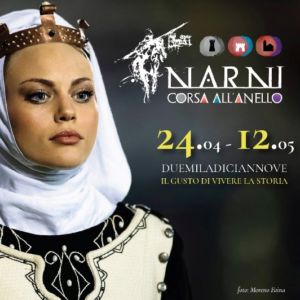 Originally it would have been called Mezule , presumably  “outside the gates (of the city)”, as it includ es the area of ​​Narni which is located under the Rocca just outside the ancient gates.

This was originally called Foraporta ,  “in the middle of the gates (of the city)”, as it includes the central part of the city of Narni between the Duomo and Piazza dei Priori.

This district takes its name from the ancient church of Santa Maria Maggiore, now deconsecrated, of San Domenico and includes the territory from Santa Maria Impensole to Porta Polella. 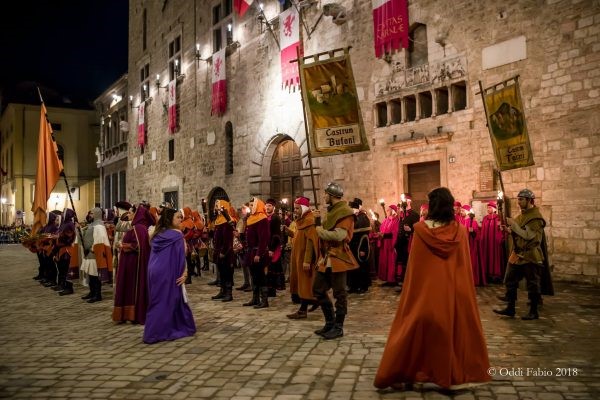 The Saturday before the race the Narni ring turns into a medieval theater the size of the city. A along procession of about 600 costumers  parade through the streets, lit by torches and colored by the flags of the Three districts as displayed by the citizens on the windows. At the head of the procession will be placed the musicians, followed by the Municipal Magistrates then by those of those of the Pope. Three districts will follow based on the result of the previous year’s race.