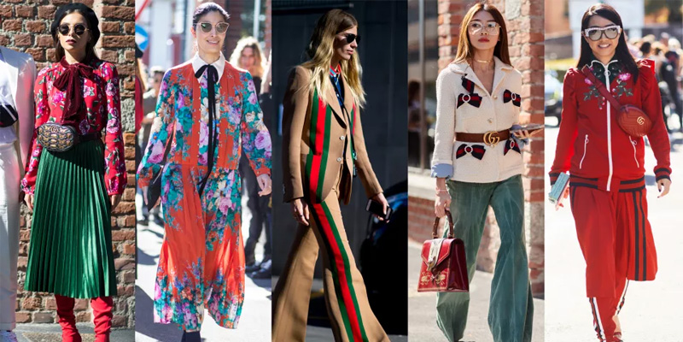 Italy is one of the leading countries in fashion design, alongside France, the United States and the United Kingdom.  Fashion has always been an important part of the country’s cultural life and society, and Italians are well known for dressing well; “la bella figura“, or good impression, remains traditional.

However, with fashion evenings held by Giovanni Battista Giorgini in Florence,  the “Italian school”  started to compete with the French haute couture, and labels such as Ferragamo and Gucci began to compete with Chanel and Dior.

In 2009 Milan was ranked the top fashion capital of the world.

Milan is generally considered one of the “big four” global fashion capitals, along with New York City, Paris, and London.

The concept Made in Italy is a brand that represents excellence of creativity and craftsmanship. Italian luxury goods are well known for the high quality of their materials and the elegance and grace that goes into making them.

Examples of major Italian fashion houses are: Giorgio Armani, Diesel, Moschino and Prada, to name a few. Italian fashion reached its peak during the Renaissance, as Italy is widely recognized as the birthplace of the latter. Art, music, education, finance and philosophy flourished and, with it, Italian fashion designs became very popular.

Fashion has always had great importance in society. Italian fashion stands out for its well-known brands that are sold all over the world. Italians in general do not appreciate the success of the fashion industry but this type of art should be appreciated much more. After all, Italian brands are unique. Italian fashion is sought after all over the world, precisely because of it is uniqueness and artistry.