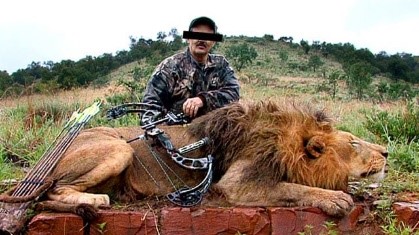 Travel to South Africa is booming, not only for nature lovers. South Africa is also a paradise for hunters – Thousands of hunting tourists from Europe and the USA travel to the region and bring home dead animals instead of photos as souvenirs.

Nearly all wild species are available – it’s just a question of money. An especially alarming form of trophy hunting is the “Canned Hunting” of lions

Canned hunting                 The lions are bred on farms and raised by hand, so they are used to humans. In a canned hunt the animals can’t escape from the it cages. Sometimes they are even sedated with medicine.

Anyone can go and hunt lions in South Africa – a hunting license or proven hunting experience isn’t necessary.

Boom in breeding farms and shootings                 Lions are bred on more than 190 farms for trophy hunting in South Africa. These animals are usually raised by hand and accustomed to humans. Today, more than 6,000 captive animals are threatened with the same gruesome fate.

First pet                               Many of the young animals must then serve as tourist attractions where people can pet them, take photos with them and take them for walks. Tourists visit these farms and pay money to look at or touch young lion cubs, completely unaware of what their final fates will be.

Then shoot                      The lions reach trophy age after four to seven years and are then offered to the hunters for shooting. In many cases the ‘hunting’ isn’t carried out on the same farm that the animal was bred at. Instead, the lions are taken to other areas and shot there.

It is incredibly cruel to hunt down an animal that has been raised to trust humans especially if this is done in a confined space from which it has no chance of escaping. This is even more cruel than “normal” hunting, already a very barbaric form of “sport”.