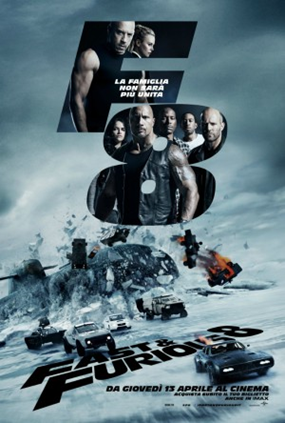 This action movie was directed by F. Gary Gray  and distributed by Universal pictures. The movie is set in America, Russia and Europe.

Vin Diesel is the lead character Dom Toretto. During his honeymoon in Cuba with his wife, Letty, played by Michelle Rodriguez, he meets Cipher, who blackmails, him with a mysterious photo.

Meanwhile Dom’s friend and policeman Hobbs, Dwayne Johnson, is informed about the theft of a bomb that he must recover, and its at this point that Dom misleads his friends.

His family, confused by his uncharacteristic behaviour, follow him around the world to make sense of it all.

The movie was on the shortlist for Teen Choice Awards.

I recommend this movie because if you like action/adventure movies, it is perfect as there are a lot of twists in the plot it also shows that we must never lose hope.