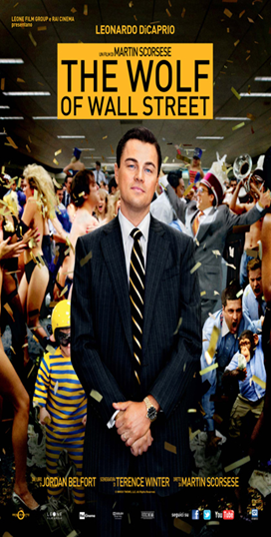 The Wolf of Wall Street is a biographical black comedy directed by Martin Scorsese and written by Terence Winter, based on the memoirs of Jordan Belfort.

The setting is Wall Street in the 1980s. Leonardo Di Caprio plays the role of Jordan Belfort and Donnie Azoff is Jonah Hill, his business partner and friend.

The movie shows Belfort’s prospective on his career as a stockbroker in New York City and how his firm, Stratton Oakmont, engaged in corruption and fraud on Wall Street, ultimately leading to his downfall.

The climax is when Jordan takes a pill called Lemmon 714, a very rare drug.

He thinks the drug is ineffective because nothing happens after 30 minutes. He goes to the country club where the drug kicks in. He collapses to the ground and manages to get home but his friend Donnie is chocking.

Belfort wakes up the next morning and gets arrested.

In my opinion this film is a masterpiece. It presents strong scenes on the issues of drugs and sex but it makes us understand the lives of some of the powerful on Wall Street.